Join us as the Outcome 2023 partners

Showcase your products, services, frameworks, vision, and the why of your work

Outcome 2023 gives you a near-perfect platform to showcase your products or services to the conference audience.

Immanent Solutions—Our partners for the Outcome 2023.

Immanent Solutions is a power hub of Blockchain Solution Architects who aim to create robust solutions that give wings to your business ideas. See their website for more details.

Write to [email protected] for the partners’ kit and for your question if you have. We have a few slots for media partners too who can join us as quiet partners because we have some common goals. 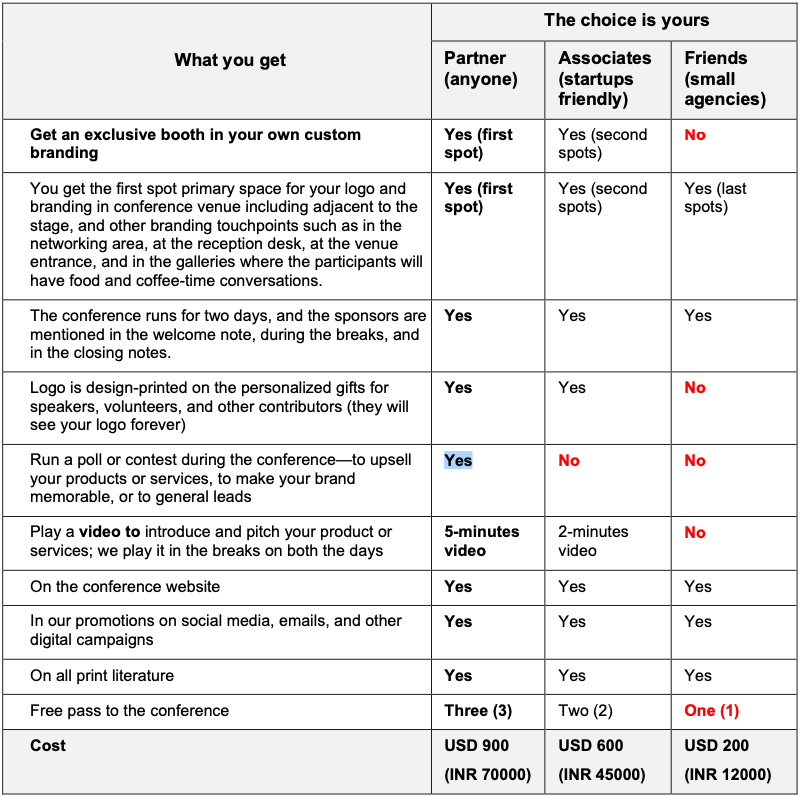 If you are flying to #Chandigarh for the Outcome 2020 next month, take a minute to understand the climate impact of your #flights: https://t.co/gYKMGON0RM

PS: If you are not, have a look at the program and think again https://t.co/9k77oXZr5M #ux #uxconference pic.twitter.com/v1rRSM06Q6

For a #conference, we talk about the quality of talks, leads, venue experience. How about the #conferenceX for the differently-abled?

Outcome is a #ux #design conf in #Chandigarh and Thisten is one of our sponsors!

(All the links in this story open in a new browser tab.)

One time, a girl was living with a boy—they both worked in digital products in content and UX adjacent roles. One fine day, the boy read a very small story of how we add complexity to some simple decisions sometimes (see the story).

They felt that they should learn to make at least some of their decisions quickly. To begin with, they checked their online shopping cart—a few products were added for a long time now. The couple was removing and nor buying these. The trade-offs were a bit complicated.

They felt the same kind of indecision in other aspects of their life. The girl thought that it has something to do with the energy. She took out a compass and they both wanted to check their North. None of them knew how to use the compass and a quick online search showed them how to find our North. They did. The compass was their gateway to process certain decisions in their life.

One fine morning they received the good news. The girl was expecting and they were so excited to welcome the new life. The man quickly ran a scan of their investments—the mutual funds, the coins, and some stocks. Are they worth an investment? He thought about it.

As they were preparing themselves for the baby, the boy’s career took an upswing. He got a promotion. These were the game changing moments for both of them. They were happy that they were planning a lot of things.

As the time of the delivery was getting closer, the girl felt the need to slow down—in buying new things, in their work, in their decisions. She wanted to pause and she saw a story in an Outcome 2020 email for how we tend to slow down our car without a reason because we just want to slow down.

The pause made them think.

On 12 August, the baby saw the light and the couple was absolutely delighted to see the baby. (I wrote a story in the year 2006 and the story had the same date for something in the year 2016, it was August 12. See a tweet with a picture from the story.).

It was in Outcome 2020 and their small galaxy within the Milky Way was changed now. Their portfolio was totally different now—and priorities too.

They named their baby as Toggle—something they both liked. Toggle Clark.

For them, Toggle could work as an incentive, a lever, a direction, and a support system. They hoped that now they could exercise the choice better, and more clearly, and quickly enough.

Outcome 2023 could be that Toggle for you.

Mutual funds, or a $25 book, or a an extra pair of shoes? The ticket could be your gateway to self-awareness, self-clarity, and to those items that always tend to stay in the cart.

You can Toggle now.

The call for speakers is open, the opportunity to partner is open, the program is brewing up nicely, and the tickets are available now.

Outcome 2023 comes back to the beautiful EDC building, IT Park, Chandigarh

Our friends and partners in the past events